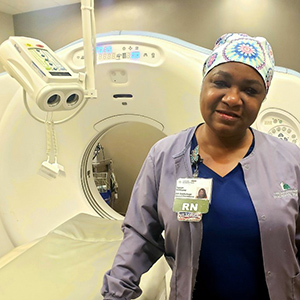 During February we observe Black History Month and reflect on both the contributions of Black Americans to our nation and culture, as well as on their struggles for equality. This year’s theme is Black Health and Wellness, intended to highlight the many diverse factors that contribute to improving Black health and wellness. One of the important contributors – historically and today – are the many Black professionals in healthcare, from pioneering medical researchers to physicians, nurses and other care givers serving their communities. This month we will profile some of our Black colleagues at Good Samaritan Hospital to learn more about their work and their inspirations for undertaking a career in healthcare.

Q: Where did you grow up? When did you come to San Jose?

I was born in Queens, New York. But my dad was a career Marine and we moved around a lot. For the most part I was raised in San Diego while my dad was a drill instructor at Camp Pendleton. I came to San Jose in 2006.

Q: Where did you get your training?

I’ve been nursing for 27 years. My training started when I was serving in the US Army. I enlisted in 1986 and was stationed in Pennsylvania for three years before I was deployed to Korea. I went to school there and then moved to Augusta, Georgia and got my Bachelor’s in Nursing from the Medical College of Georgia.

Q: What led you to want a career in healthcare?

I thought I wanted a career in the medical field, and I tried when I was just 19. But I was young, I wasn’t a mother yet, and I had a bit of a queasy stomach, so it didn’t work. By the time I got to Georgia I had been in the Army, I was the mother of two, a single mom, and I had been through so much. I knew that when I got out of the Army, I needed a livelihood so I could provide for my kids. In the Army I did clerical work, and I knew that wouldn’t be enough, so I looked at nursing, something that would sustain my family for the long term.

Q: Who was/were your inspiration(s) as you were building your career?

I was inspired a lot by my family. My mom, who passed away in 2004, was an entertainer and traveled a lot; that side of my family was tied into the musical field – my aunt is Gloria Gaynor -- so I was raised by my dad as a single parent. He raised three girls, and all my life I would see him put on that grand hat, his patent leather shoes, all “squared away” as he would say, and he taught me the importance of that. And my grandmother, who died at beginning of COVID at age 102. I call her a Mafia grandmother. She didn’t say much, but she taught me to be a good listener, because even if you have a plan, if you listen someone will tell you something that will send you in a different direction that could turn out to be the right direction. From all of that, I think every day when I wake up in the morning that it's a new opportunity.

Two other people were big inspirations for me. One is Alice Chiou, who with her husband Victor is a successful entrepreneur; she taught me how to be independent and successful. The other is Karen Coleman, a nurse who helped establish the IR nursing department and retired in 2020 after 50 years of nursing at Good Samaritan Hospital; she is a mentor and close friend who taught me to always take the high road.

Q: Were there Black (or Black women) role models along the way? How did those role models (or lack of them) affect your career path?

I have a friend who was in the Army with me, Gracie Foster, who was a mentor. I was a young mother in my early 20s and I had to leave my kids for a year when I was stationed in Korea. That was tough. She told me, “If you had been an entertainer and done the same thing, everyone would applaud you. But what you’re doing is for your kids’ future.”

Q: How long have you been at Good Samaritan Hospital?

I worked at Regional Medical Center for 13 years after I came to San Jose, before I went to Good Samaritan in 2019.

Q: What do you do now at Good Samaritan Hospital? How does your work affect patients and their care?

Interventional radiology is different from diagnostic radiology, like MRIs and X-rays you get and then the doctor reads them. We’re in the room with the doctors when they are looking at scans as they are treating a patient – people with cancer, for example. We’re nurses but we are all educated in critical care and all of us have a critical ICU background. We make sure everything is going right with the patient while the docs use the imaging for the procedure. I remember working on one case with a woman in labor who had lost her first baby to a miscarriage. After the baby was born, the mother started to hemorrhage. At first they thought they would have to remove her uterus to save her, meaning she could never have another child. But the IR doctors were able to use scans to find the source and cauterize her uterine artery and save her uterus. That was really rewarding.

Q: What means the most to you about your job? What do you love?

I really feel fortunate to be at my job. My director, Sue Marklein, is amazing, she’s over all the imaging departments. She trusts us to make the right decisions. So the six of us nurses in our office have the autonomy to run our own department.  I feel being in that department, I have grown personally. We call each other family, we allow each other to be who we are. It’s a great environment for me to work and I love my job.

Q: How important is diversity in the healthcare workforce? How does greater diversity affect the patient experience?

Diversity is very important. When I came to San Jose in 2006, I didn’t see a lot of employees who looked like me. Since Tomi Ryba became the CEO at Good Samaritan, diversity has increased. But I also know that sometimes, even when they work with and are exposed to people of color of all kinds, that with Black people colleagues can get uncomfortable to contribute to a conversation about diversity. They don’t know what questions to ask to understand our experience. Just the other day I was standing in a hallway waiting to do a procedure, and I was with four colleagues, a Caucasian man and three Asian women. There was a housekeeping cart down the hall, and a nurse walked by and looked at me and said “I need you to move that cart.” I just turned so she could see my badge, with “RN” and “Veteran” on it. She apologized. And I don’t take offense at that, and I don’t get on a speaker’s platform about it. I don’t want people to become defensive and shut down. I just want them to think, and I hope to delve into themselves and ask, “why did I assume that about her?” My purpose is to re-educate people and I try to do that every day.

Q: What would you tell a young Black woman today about choosing a career in healthcare?

I have a granddaughter who is 21 years old and wants to get into healthcare. And I would tell her that there’s a higher expectation of a woman, and even higher of a woman of color. And I would ask her, is that good or bad for you? For me, that helped build my character, helped make me very good at what I do, to give 150%. And I’m not doing that for anyone else, I’m doing it for myself. My dad told me when I joined the Army that there will be some people who will come after you. Just make sure you are squared away from top to bottom. If you do it right, take accountability, they will not prevail.

February 23, 2022
A profile of Black colleagues at Good Samaritan Hospital to learn more about their work and their inspirations.
Previous Post

How to advocate for yourself with your physician

February 9, 2022 by Tayla Holman
It can be difficult to feel empowered to speak up for yourself in a doctor's office. Find some ideas and tools for how to speak with your physician...
Next Post
Back to blog home

What to eat when craving sugar

Are there different types of PTSD?

The depression and heart disease link