Skip to main content
OUR COVID-19 RESPONSE
Get important health information and updates on our enhanced safety protections. Resource Hub 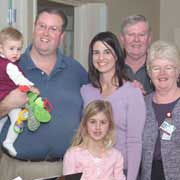 With one child in her arms and another helping hold the scissors, seven-year cancer survivor Kelly O’Connor lead the ribbon-cutting team as Good Samaritan Hospital officially opened its dedicated Oncology Unit in December 2005.

Mrs. O’Connor was the mother of a toddler when she received her diagnosis of acute leukemia. Treated at Good Sam for more than a year, she said in remarks to an audience of community members, employees and physicians, “I never felt like I was just another patient. I always felt there was time for me and room for my family.” In remission for seven years, Mrs. O’Connor now has a second daughter and an appreciation for the care and compassion she received at Good Sam.

“Having all private rooms will make a difference to each patient and their families, and that’s important because you don’t fight this battle alone. And the PlaneTree Library (on the unit) even has books you can read to your children to help them understand what Mom or Dad is going through,” Mrs. O’Connor said.